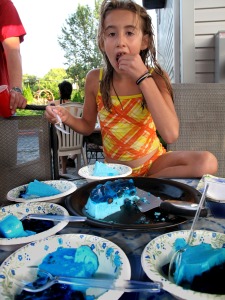 This blueberry jello mold with blueberries and vanilla frozen yogurt was a hit with the kids a pool party (and a nice compliment to the pool itself).

In a bowl, stir 1 cup of the boiling water into 1 package of the blueberry gelatin until gelatin is fully dissolved. Stir in cold water. Refrigerate mixture until thickened. Fold blueberries into gelatin and spoon into a 7 cup mold. Refrigerate until gelatin is set but not firm. (Gelatin should stick to your finger when touched.)

Meanwhile, in a separate bowl, stir in 2 cups of the boiling water into 2 packages of the blueberry gelatin until gelatin is fully dissolved. Whisk in yogurt until the mixture is smooth. Allow mixture to cool to room temperature then gently spoon into the mold over the blueberry gelatin layer. Refrigerate until firm. Unmold and serve.