My sister gave me this Frozen Smiles ice cube tray a year or two ago and I’ve been meaning to give it a try. These jello dentures came out so well I almost didn’t post them because I thought they looked a little too real. But I decided their ghastly smile would make a fun and kinda ghoulish treat for a Halloween party that both kids and adults alike would find amusing. Enjoy and have a Happy Halloween!

This recipe will fill 2 or 3 of the ice cube trays. 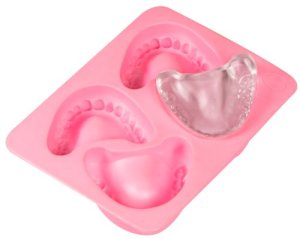 In a bowl, sprinkle unflavored gelatin over 1/4 cup of the cold water and allow the gelatin to absorb the water. Stir in 1/2 cup of the boiling water until gelatin is fully dissolved. Stir in sweetened condensed milk.

Lightly grease the silicon ice cube trays with cooking spary and use a papertowel to wipe out any excess grease. Gently spoon the white mixture into trays filling up only the “teeth” part of the mold. Refrigerate for about 15 minutes, checking it often, until the gelatin is set but not completely firm- the gelatin should stick to your finger when touched.

Meanwhile, in a separate bowl, stir in 1 cup of the boiling water into the package of the strawberry gelatin until gelatin is fully dissolved. Stir in sweetened condensed milk. Allow mixture to cool to room temperature then gently spoon into the molds over the white gelatin teeth. Refrigerate until firm.

To unmold gently peel the gelatin out of the mold. It should come out somewhat easily because of the cooking spray. Stack one set of dentures on top of the other and serve.

Leave a Reply to Literally a Gag Gift | Yardsaling to Adventure! Cancel reply